First and Ten Game of the Week Preview - Week 10 - Sherman vs We - KTEN.com - Texoma news, weather and sports 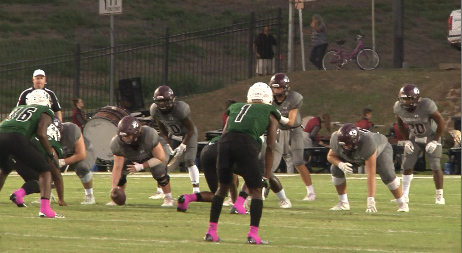 SHERMAN, TX - I think a lot of people think it's over. Not necessarily on our team but in our community so we just have to focus on one week and win this week" said Tate Bethel, the Sherman Quarterback.

The Bearcats have struggled this season, they're currently sitting at 500 on the year and 6th place in the district but they aren't counting themselves out of the playoff run quite yet.

"Well, we still want to keep getting better every day. You know, what we really want to do is increase in 1% every day and I think our kids have really done that. We've increased being better on offense" said Bearcats Head Coach JD Martinez.

Sherman defeated Wylie East last Friday to break a three-game losing streak and they hope that thanks to some changes in their run game, they'll be able to get the dub against West Mesquite tomorrow night.

"We moved around our offense a bit so we could establish a run, and I'm happy with the results we were able to do but we want to continue to keep improving. It was nice to see Mike running and of course, defensively we were able to keep our defense off and when we're able to do that they're able to stay fresh" said Coach Martinez.

"we're just treating it like, you've got to go one and 0, last two weeks, one and 0. Not worried about next week, worried about this week" said Tate Bethel.

And despite the hour and 20-minute drive, the Sherman faithful will travel down 75 tomorrow afternoon to cheer on their team and the road game doesn't bother the bearcats one bit.

"yeah it doesn't affect us we know there is going to be a good crowd there behind us and it doesn't bother us too much going on the road" said Bedgood.