Denison and Sherman set for 121st Battle of the Ax - KTEN.com - Texoma news, weather and sports

Denison and Sherman set for 121st Battle of the Ax 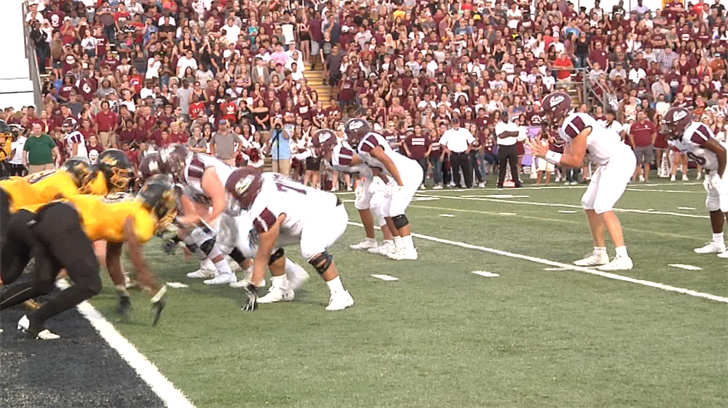 That's exactly how Bearcat stadium will feel this Friday night for the 121st battle of the ax. The longest running football rivalry in the state of Texas always draws a huge crowd, no matter the stadium it's played in.

"Well obviously we like it better at our home stadium but either way, we're so close to this community that they go with us wherever we go" said Denisons senior Cayden Earnhart.

"People don't understand how loud it gets on that field. Especially for an O-lineman like me, we can hardly hear the snap count. You can hardly hear what's going on because you're focused on what you need to do. And it's an experience that most people don't get to play it but here I am getting to do that" said Sherman senior Tyler Smith.

The yellow jackets are hoping to extend their winning streak to 7 straight years while this class of Sherman seniors are hoping to win it for the first time since they've been in high school.

"it's been a full class that have not seen the ax. It would just mean everything to bring that back to our community. We have people who come out to the games and they've been Bearcats their whole lives, they've grown up in this city, live in this city and it would be nice for them to see it for once" said Smith.

"It's a big deal, you know no one wants to loose the ax as a senior. You know we want to do it for our town and for our team so that they can carry on the tradition and keep this thing going" said Denison senior Christin Smallwood.

Not only is battle of the Ax the most exciting game of the year of these two teams, but it's how they start off the 2019 season.

"We learn a lot about our team from the game because it's the first game. You know, a lot of questions are still out there but you have to go out there any play your best, that's it" said Sherman head coach JD Martinez.

"Both team are undefeated right now. There's a lot of excitement, there's always excitement at the beginning. It just adds a little bit more too it" said Denison head coach Chad Rogers.

Of course each team wants to bring that ax back to their city, but it's about more than just that.

"The ax, obviously it's one of the biggest goals of the year but just to be on this team, it's a real honor" said Earnhart.