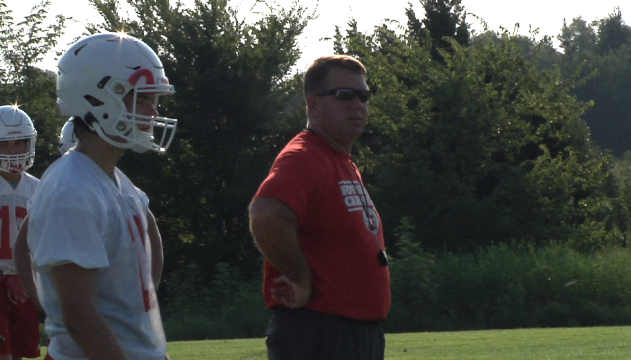 POTTSBORO, TX - "Our guys are getting after it, they are excited and we are ready to get the season going," said Pottsboro head football coach Matt Poe.

The Cardinals are excited for what lies ahead in 2019 and also eager to put 2018 behind them and get back to winning big in district five.

"Our goal every year is to win the district championship and we are going to talk about it everyday, you know our goal with our guys is to win every rep and I think if we can get to that point to where we do that then we will meet our goal," said Coach Poe.

"Our job is to win every day and win the down and the last two seasons have been a little bit worse than what our team Is used to so this we are just hoping to go out there and win a district championship," said Pottsboro senior receiver Robert Goins.

In a district loaded with offensive weapons when it comes to playmakers it is a bit of a keeping up with the jones type deal, and Pottsboro's 2019 roster is as loaded as anyone they will play.

"Our skill positions, we feel like we have a lot of guys that can play, whether it be receiver, running back, quarterbacks and secondary," said Coach Poe.

"I think it is very helpful because it keeps the defense on their heels, they do not get lined up right half the time and they do not know who to cover, it just makes it very difficult for the opposing team to go against," said Pottsboro senior receiver Zach Wideman.

While Pottsboro feels it has all the tools on offense to keep their opponents off balance, they also believe points will be hard to come by against their versatile  defense.