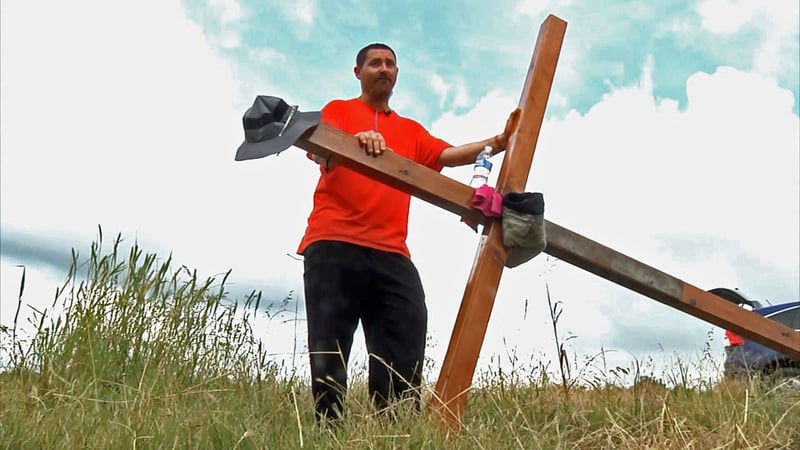 Acie Burleson is carrying a 40-pound wooden cross across the USA. (KTEN) 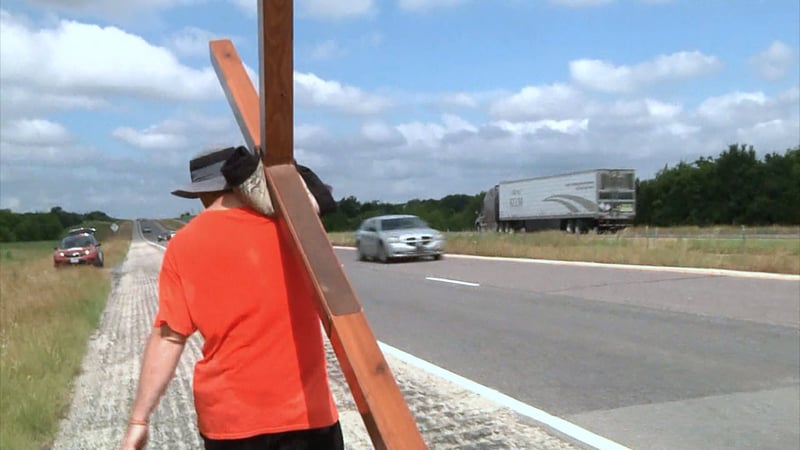 GRAYSON COUNTY, Texas -- We all have our crosses to bear. One man seen walking along US 82 west of Sherman on Wednesday was carrying his own.

Acie Burleson is traveling from his home town of Andrews, South Carolina, to the Grand Canyon on foot. Along the journey, he is bearing a 40-pound wooden cross attached to a wheel.

Burleson, 34, explained it this way: His faith carries him, so he's carrying a symbol of his faith.

"Long story short, God called me to be a walking memorial for Him," Burleson said. "I just started carrying a cross, and lives were changed, and as I carry this cross, people look and people notice."

He's just about halfway through his planned 2,229-mile journey, which started on March 11. At last report, he had reached Whitesboro.

His schedule has him traveling 12 to 14 miles a day, depending on how many people he pauses to talk with.

"I think it's fantastic what he's doing," said Jim Browning. "It blesses me, it encourages me. He's got a fantastic witness and testimony."

"I thought, 'I can bring him some food and some water and things like that,'" she said. "I thought his message is terrific."

Southmayd residents Katherine and Robert Cobert saw Burleson walking through Sherman, and his message inspired them to help, too.

"I probably would have never asked a stranger into my home, but I felt it in my spirit that it was okay," Cobert said.

The kindness he's encountered along the way gives Burleson the resolve to complete his long journey.

"It's changed my life," he said. "Following the call of God, it's given me joy and happiness."