Van Alstyne ready to go the distance in 2019 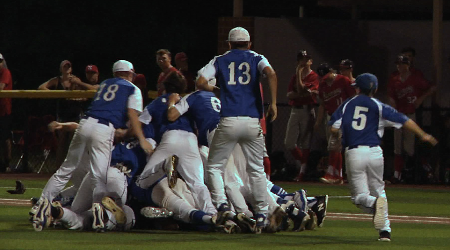 VAN ALSTYNE, TX - Van Alstyne baseball is no stranger to the state tournament but after failing to advance in 2016, they're looking to make sure they bring home a trophy this year.

"It's fun to go to state but the ultimate goal is to win state. I mean what's the point of going if you don't want to win," said Chandler David.

"During that time, I didn't lose confidence in our guys, I felt really comfortable that we would come back. Wasn't quite sure how we were going to do it," said Head Coach Jimmy Haynes.

"It feels great. I mean, we fought hard all playoffs, especially these last two rounds. A lot of comeback wins. Just good to know that we can handle that adversity any time it gets thrown our way." said senior pitcher Rhett Gallagher.

It's easier to handle that adversity when you have 4 ace pitchers.

"It just gives the team confidence you know, we don't, you know, have to score 15 runs to win," David said.

"I don't think there's another 3A team in the state that has that kind of depth. There may be one or two teams that have one of our guys but I don't think anybody has two of them. So it's not often that you get to have a whole pitching staff on a 3A baseball team and we have a whole crew." said Gallagher.

They'll be relying on their bullpen to make sure that this year, the trophy comes home with them.

"It would mean the world because we went freshman year and came up just a little bit short so we still have a little bit of unfinished business in Round Rock," Gallagher said.