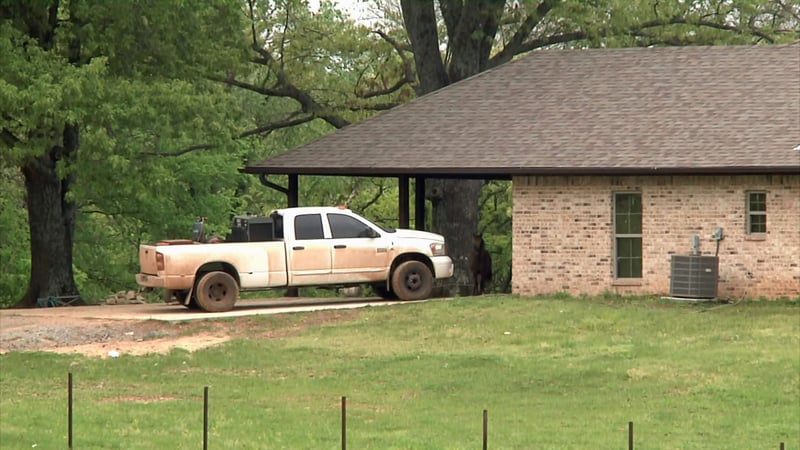 A man was shot and killed at this Atoka County residence on April 14, 2019. His wife told investigators she pulled the trigger. (KTEN)

ATOKA, Okla. -- An Atoka man is dead after a verbal disagreement on Sunday night turned violent.

The Oklahoma State Bureau of Investigation said Heather and Nick Calhoun had been arguing at their home on Highway 3. The drama of what happened next was captured in a dramatic 911 recording.

HEATHER CALHOUN: "I need an ambulance. My husband got shot. I have my hand on his arm, he's just taking deep breaths. I have three kids here, and I really need all to come."

DISPATCHER: "Who shot him?"

HEATHER CALHOUN: "I accidentally shot him."

"She said that on 911, and all the leads have to be checked to make sure everything fits," Taylor said.

Deputies had been at the Calhoun home on Sunday morning after being called to mediate another fight. Hours later, Nick Calhoun, 31, was dead with a gunshot wound to his chest.

"It has happened you know, there have been people shot accidentally and the gun goes off or feared for his safety," Taylor said.

The OSBI labels Nick Calhoun's death as "suspicious." Taylor said the sheriff's office will present the facts of the case to the district attorney, who will determine whether Heather Calhoun will face charges related to her husband's death.