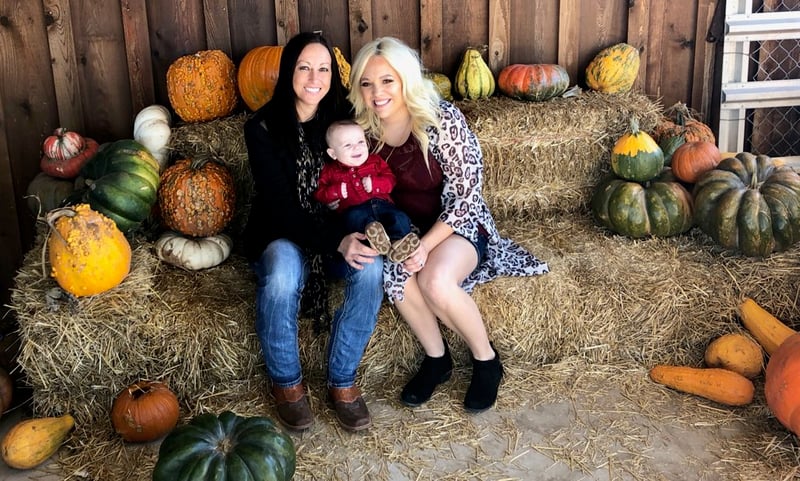 Ashleigh and Bliss Coulter are both carried their baby boy Stetsen

Gainesville, Texas --- Two north Texas women become one of the first same-sex couples to both carry the same child; and it's all thanks to new fertility technology.

5 month old baby Stetsen is unique in more ways than one, especially for how he came into the world. "We've said  it countless times that hes our miracle baby," says Stetsen's two moms, Ashleigh and Bliss Coulter.

The Coulters have always wanted a baby since they got married, but somehow, someway, they both wanted to be a part of the pregnancy. "Its always been a thought for as long as I remember," says Bliss Coulter, "so I started calling around and calling doctors, and asking them if this is possible."

That's when the Coulters met fertility specialists Dr. Kathy and Kevin Doody at the CARE Fertility Center in Bedford, Texas; they're known as the first to try a new procedure using radical technology. "We refer to it as effortless IVF," says Dr. Kevin Doody, "so it's a more streamline process."

Here's how it works: It starts like regular Invetro, by stimulating the ovaries and harvesting the egg. However, instead of using an incubator in a lab, they use a small plastic device called an 'Invocell.' "In this case, we use an Invocell device, which we've been using for several years now, to allow the eggs to fertilize in bliss's body," says Dr. Kathy Doody.

The Invocell remained in Bliss's body for 5 days to fertilize the eggs. Next: the eggs were removed, frozen and placed into Ashley's body about a month later."The only difference is that you're not transferring it back to the same woman." says Dr. Kathy Doody.

The amazing part, it only took one try!

"Then they took a pregnancy test, and we got pregnant on the first try," says Ashleigh, "we were shocked, and we both joked about it and said, hey we just both carried the baby, it just kind of clicked with us."

Because it removed the lab work, the Doody's say effortless I-V-F is actually half the cost of invetro by removing lab work, it's more natural, and includes less doctors visits.

"This is less complicated, its much simpler," says Dr. Kevin Doody.

We asked the Coulters if they plan to have any more kids using the same process. "We plan to have another kid in the future," says Ashleigh, "but we just want to focus all our attention on him right now."

A baby, who's the beginning of new hope, and new life. "To know that something that was a thought is now reality," says Bliss, "it's a miracle,."