Game Of the Week - Week 5 - Altus vs Ardmore 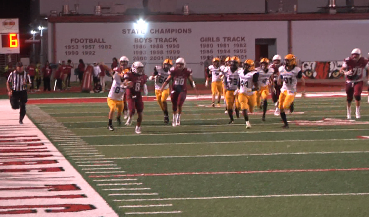 It is no wonder the Tigers are anxious to get back on the field, they have opened the season by cruising past their first four opponents, including a Lawton MacArthur program that they had lost to 16 out of their previous 18 meetings.

"We just wanted to show them that we were better this year. Last year we got beat pretty bad and we wanted show them this year," said Bruner.

"I enjoyed watching our kids play and anytime you can beat Lawton MacArthur it is big and we just have to build on it and keep working," said Ardmore head coach Josh Newby.

"I feel like in the past we were not quite as disciplined. Everybody here right now, we are just so close and I feel like being closer has made us a better team than we have been in the past," said Ardmore senior defensive tackle Trenzel Johnson.

After that big win last week the Tigers come in to week five at 4-0 having scored over 40 points in each of their last three games, but they know they have another big test in front of them this week at Noble Stadium.

"Altus is going to come in here 4-0. They beat Lawton High in week 1, so that tells you something right there," said Coach Newby.

"We are going to be physical, play fast and do our best," said Bruner.

"They are extremely physical on offense and then on defense they have nine returning starters and they are coached really well. It is going to be an exciting fun night, but it is going to be a physical contest," said Coach Newby.

The opponent may be strong, but senior Treznzel Johnson is not stressing ahead of their week 5 game.

"We are focused on Altus and we are just going to go out there and handle our business like we do every week," said Johnson.