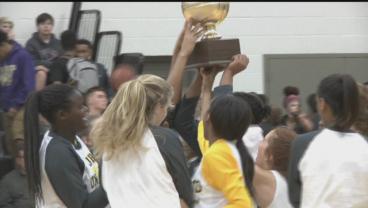 DENISON, TX - It has been a season of firsts for the Denison Lady Jackets basketball team.

"Last year was a huge stepping stone in the right direction and this year we have just kept going," said Denison head coach Rod Been.

"It has been unbelievable, I mean Denison has not really been that far, so setting a new record and being that team is just amazing," said junior guard Zya Nugent.

"It has been really exciting being here and a part of this team and moving forward," said junior forward Ikia Lacy.

Denison's season nearly came to an end against Grapevine when the Lady Mustangs came out firing, but not even a barrage of threes could shake senior Olivia Marr.

"The stage was set for a big game and they did a good job of finishing it off," said Coach Been

As the Denison girls basketball team has continued to achieve new heights over the last two years, everyone knows this success starts in the Yellow Jackets backcourt.

"I have never been okay with losing, it literally is the worst thing in the world," said Marr.

"Olivia is a good player, she wants it bad like all of us, but she wants it really bad since she is a senior," said Lacy.

"We hate losing so we will do whatever it takes to bring us back or try to win the game," said Marr.

"I know they are competitive and they know I am competitive, so it is what makes us go," said Coach Been.

For full coverage of all of our Texoma high school athletes all year long follow @DanLindbladTV @BrendanAgans @SportsKTEN on Twitter.