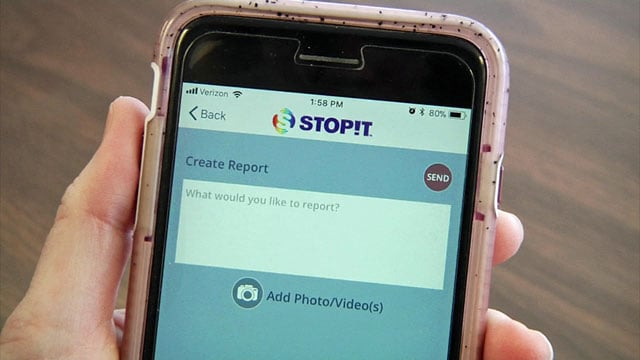 VAN ALSTYNE, Texas -- Students across the country report they've had some type of experience with bullying, and their parents seldom find out about it.

Surveys conducted by NoBullying.com and Pacer.org came up with these eye-opening findings:

With bullying a national problem, the Van Alstyne Independent School District is saying: "Not on our watch."

The district just launched the STOPit app that lets students safely -- and anonymously -- report any kind of bullying to school officials-- from social media harassment to threats of violence or self-harm.

"In an effort to make sure all of our kids that were a little reluctant about speaking to adults had a way to do it that was quick, easy, and in their native digital language," explained  Van Alstyne ISD curriculum manager Jamie Martinez. "The students can message ... they can just start typing, and it will go to the appropriate administrator, or send a full report."

She said students can add specific information and even pictures or videos to their report.

After being submitted, the message, picture, or video will go directly to the campus principal and will let them step in and handle the situation.

The district says bullying isn't a huge problem at Van Alstyne schools, but decided to launch STOPit as a preventive tool.

"The app will give us the opportunity to get in on situations earlier, and where they're not quite so big," Martinez said.

Kary Cataldie, who has three students in the district, said the smartphone reporting option is the way to go.

"I think the kids who are going through actual bullying will feel more protected by not having to put their names out there," she said. "I think it will be good for them."

The district said they hope other schools will follow in their footsteps.

"I think it will offer us a way to be more proactive in this fight that everyone's fighting against bullying," Martinez said.

Van Alstyne police Chief Tim Barnes said the department will work hand-in-hand with the school district if they their assistance is needed in any bullying case.