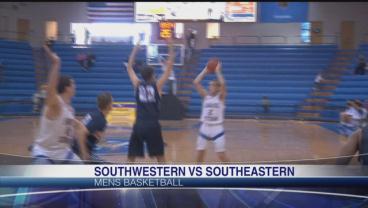 DURANT, OK – Markell Henderson and Kevin Buckingham each had 20-point outings to lead Southeastern to an 83-72 victory over southwestern Oklahoma State on Saturday afternoon in Bloomer Sullivan Arena.

The win is the team's fourth in-a-row and lifts the Savage Storm to 8-6 overall on the year and 7-2 in Great American Conference play.

"It was a little like last game," said head coach Kelly Green, "With the amount of three's they want to shoot and the spreading of the floor. We did a better job of getting out to their shooters in the second half than in the first half. They had us on our heels, especially in transition on our made baskets and how quickly we had to match up with them."

"Anytime you play a team that shoots a lot of three's," he continued, "You're going to have a lot of long rebounds. I told our guys going into it that there were going to be a lot of rebounds and that we needed to secure those. Instead of when the shot goes up and running into the basket, when the shot goes up you need to look out first, then check your man and see if he's coming in. I thought we did a good job of doing that, and for the most part, like you said, limiting it to one shot."

Markell Henderson led the way with 24 points on the night on 7-of-15 shooting with three threes, while Buckingham was 8-of-12 from the floor and 6-of-7 at the free throw line for 22 points.

Jett Jobe chipped in 14 points, as did A'Torey Everett who did so off the bench.

In all, only six players scored with Adam Dworsky adding seven points and Ryan Scott-McGuire turning in two.

The Storm shot 50.0 percent from the field and hit seven threes while also adding a 22-of-25 effort from the free throw line as a team.

Jobe turned in a double-double all on the offensive end of the floor, dishing out a game-high 10 assists as the storm tallied 22 as a team.  It's his second double-digit assists outing of the season.

Defensively, Henderson added a double-double as well by piling up 12 rebounds, while as a team the Storm held a 40-to-24 edge on the glass.

Henderson drained a kick out three on the game's opening possession to set the tone and after a brief 9-8 deficit the Storm would reel off an 8-0 run, the last four by Henderson to take a 16-9 lead.

The Bulldogs cut the SE lead to one possession early in the second half but seven-straight points capped by a Buckingham free throw would stretch the lead by out to 10 points.

The game would swing back toward SWOSU again as they erased the Storm lead and tied the game at 49-49 with 14:07 to play, but a Buckingham layup stopped the bleeding and regained SE the lead.

By the 8:48 mark Southeastern had pushed the lead back to double-digits at 65-54 on a Dworsky bucket.

SWOSU would rally one final time to close the gap to six points at 73-67, but a Henderson three would end the threat as SE pulled ahead for an 83-72 win.