First and Ten Game of the Week - Week 10: Harrah vs Ada 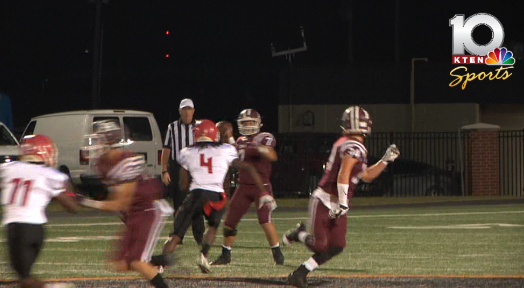 ADA, OK – The 2017 football season may not have gotten off to the perfect start for the Ada Cougars with a loss to the Ardmore Tigers in the battle of the cats, but since then they have been on a tear including last Friday with a huge win over Blanchard, now the Cougars find themselves just one win away from a district championship.

“You swell with pride a little bit, I mean these are my kids and we talk about living life together and when you see the growth. We have had some of those moments prior to that, but our backs were against the wall a little bit,” said Ada head coach Chris Berus.

“Even at halftime you could just tell that something different was going on in there. We had been in situations like that before going back to the Tuttle game. We kind of shot our self in the foot the whole night and then coming into this Blanchard game when we are having success even though we were down 3-0 we knew that if we could just keep stopping them we are going to win this game,” said senior safety Garrett Christian.

After the win over Blanchard Ada finds itself in a position to clinch the district at home.

“It is going to be one heck of a ride because I am a senior and just knowing that you have the district championship in your back pocket going into playoffs is going to feel really exciting,” said Ada senior wide receiver Zack Powell.