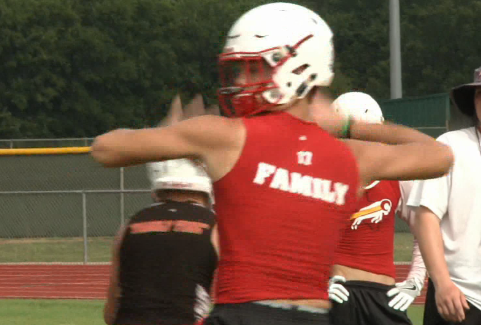 The S&S Rams come back onto the field in 2017 as an experienced group, and one that is ready to make its mark.

"We've got kids that are really buying into the program, " S&S Head Coach James Gage said. "Doing things we ask them to do, not being selfish and putting the team first. When you do things like that you have the chance to have a special season."

"We have heart, I know every person out there likes to play for their team," S&S senior Wyatt Brown said. "It's been one of the greatest experiences of my life."

Their trek to the playoffs begins on Friday when they play Callisburg, a team the Rams haven't fared well against in recent years.

"Right now we're focusing on a 1-0 mentality," Gage said. "We're not trying to look too far down the line. We have Callisburg September 1 and they have beaten us two years in a row. A lot of our kids have been a part of those two loses."

Jayce Howard is returning to the quarterback role, after spending his sophomore season as a wide receiver, one of many multi-year starters for Coach Gage. But even all that experience is just a small piece to building the puzzle that is a playoff team.

"Winning is the most difficult thing to do because every one wants to do it," Gage said. "In order to win you have to show up and do all the little things right, which is what we coach. You've got to stay healthy and you have to get lucky along the way, but we have a good group of kids and, honestly, we feel like when can get there. We just have to have a little luck along the way."