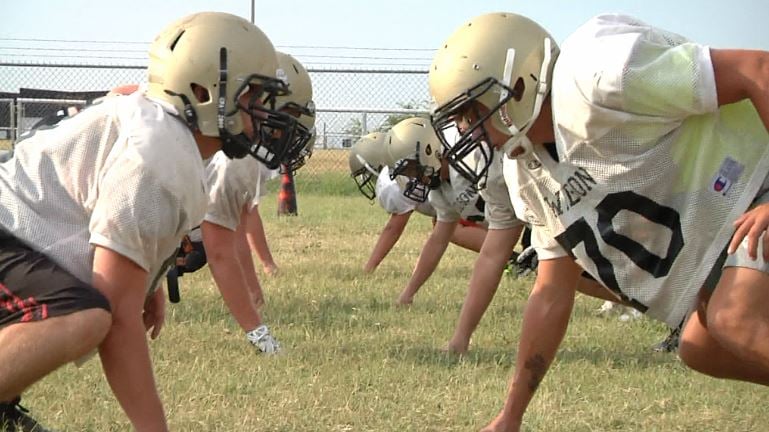 WILSON, OK – “Wilson has had a strong tradition in the early eighties and we are just trying to build that tradition back up,” said Wilson Head Coach Eric Smith.

In 2016 with that goal in mind Head Coach Eric Smith and his Wilson Eagles made the transition from 11-man football to 8-man and they believe last year’s experience will benefit them immensely as they enter 2017.

“We are putting in a new offseason and we are changing a lot of things up. Last year we were just getting a feel for 8-man football because we had just switched from 8-man to 11-man.  This year we are just looking to improve, we are looking to improve everywhere. We put in a new offense and the kids have really come out and really taken to it,” said Smith.

“It is all speed in 8-man. You can be 150 pounds and be a good team but it is all about your coverage,” said senior running back Dusty Asbery.

“It is a lot faster and a lot more scoring, but other than that it is just football,” said senior linebacker Dylan Lambert.

“I have coached 11-man, 8-man and 6-man and football is football. It is all about blocking and tackling and running fast,” said smith.

Football may be football, but in a town like Wilson Friday night’s take on an even bigger meaning in the fall.

“We ended up 2-9 and made the playoffs and that night of the playoffs, Friday night it was a big thing for the whole community. You could have robbed the town here. It is just one of those where we have a great community that supports the kids no matter what we are doing and it shows on Friday nights here,” said Smith.

“We are not going to go to some school and not have any fans there. It helps us have motivation coming into the game,” said Lambert.

“It is great, I mean that everyone knows everyone and you can go to the store and someone will ask you about your game and how much fun you had. It is amazing,” said Asbery.