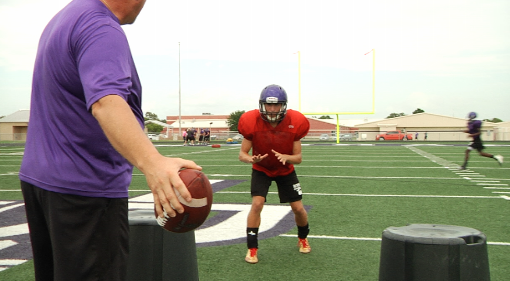 BONHAM, TX - “The Purple Warriors have a tradition rich in football and the people here don’t let you forget it,” said Bonham Head Coach Tony Johnson

As with all of Texas, football is religion in Bonham and being a apart of perhaps the toughest district in the state means the Purple Warriors will have to hit the ground running, luckily running fast is something this year’s team is not all that worried about.

“We have way more speed than we did last year,” said junior wide receiver Hayden Stevenson.

“We are quicker, we are a faster group of kids,” said Johnson.

“We are a lot faster, a lot faster than we were last year,” said senior fullback and linebacker Ty Bateman.

Although speed may not be an issue for Bonham in 2017 they know the real challenge they present for their opponents is the versatility this speed allows their offense to utilize beyond just the traditional passing and running game.

“We can do read fakes read options and you never know when you are going to get hit with a deep ball,” said Stevenson.

“We can run routes harder, the sidelines are going to be full of energy. We aren’t going to have to worry about somebody not doing their job because we know they are going to do their job. We’ve got a better bond. We just worry about us as one heartbeat,” said Bateman.

With an experienced bunch of athletes, this team is poised to have a breakout year and Coach Tony Johnson believes will keep building on the progress that started last season.

“We did lose some great players last year and made the playoffs for the first time in four years, so it was a great opportunity for these kids. We play in the toughest district in all of 4A in my opinion.  You try to build a rivalry with one but you can’t because they are all equally tough to play.”