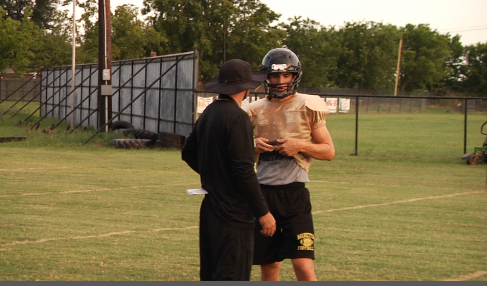 The 2017 edition of the Marietta Indians fully intend to be a blur, sprinting past anyone who stands in their way this season and that speed has only been enhanced by their new coach, Jacob Offolter’s commitment to conditioning his players.

“We are going to be in a lot better shape and faster hopefully is what I’m hoping for,” said senior Kyler Erwin.

“I just think it creates a mental toughness and obviously being in shape his important in football. I think it has as much to do with mental as anything else,” said Marietta’s new head coach Jacob Offolter.

“The practices are more organized. We aren’t worried about doing drills that we don’t know how to do, we are just working on the same drills and getting better as a team,” said senior, Tagunn Matthews.

“I’m having to read a lot more in plays than I was. I think the new coaching staff is great. It’s a big change but I like it so far,” said Erwin.

This coaching change may have presented some challenges for the senior leaders, but they are focused and ready to roll and focused on having a strong 2017.

“I’m just looking forward to trying to make playoffs and hopefully make a run to the championship.  It’s our last year and we are just putting everything on the line to try and get there,” said Matthews.