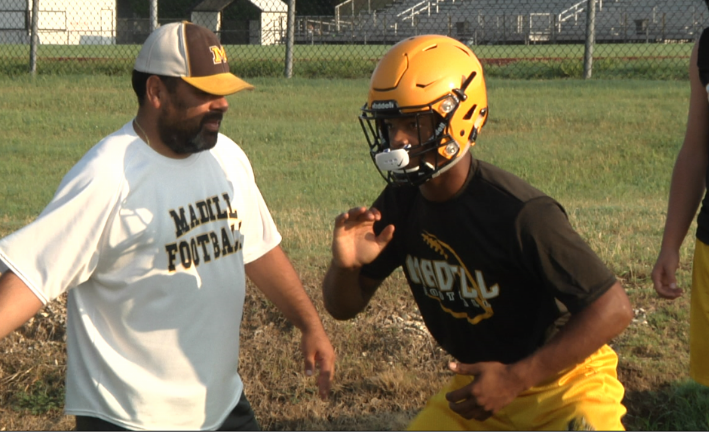 MADILL, OK. -- "The kids here are pretty special as well as the coaching staff is," Madill Head Coach Drew Young said. "I didn't want to disrupt the continuity that we had through the years, so I stayed."

Wildcats Head Coach Drew Young came over to Madill when former head coach Milton Cooper earned the top job. Young has spent the past 6 years as the defensive coordinator.

"Coach Young has been here ever since I've been in high school," Madill senior Trevor Goff said. "It's not much of a change, we still have a coach we know. We still love him."

"It's really helpful," Madill senior Traven Bagley said. "I don't think he would've come here if he wasn't already here with Coach Cooper. I'm really glad he was on the staff so he already knows a lot of the stuff, even though we've changed it."

The numbers won't be in Madill's favor this season. Coach Young says that most of the guys will play both sides of the ball, some even the full game.

"That's a tough deal," Young said. "Especially when you get into these schools that have a lot of numbers and are playing kids one way. That second half, 4th quarter especially, becomes definitly a concern."

"It's all a mental mindset," Madill senior Tanner Edmonds said. "First, you have to be able to come out (to the practice fields) and perform on every single down. Give 100 percent and be able to do that for four quarters. It's tough, but we are conditioned for it."

It's all for the name on the front of the jersey.

"It's been a dream," Edmonds said. "You get to grow up in the hometown where everybody knows your name. When you step out on the field you aren't playing for yourself, you play for the guys out here."