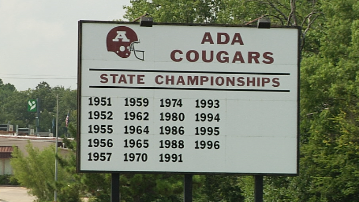 They have 19 state titles, but the last one came in 1996, so it is understandable that the number 20 means some special to the 2017 Cougars.

“We always try to be perfect in everything that we do and number 20, we are trying to put that up there on the board. That’s what the seniors want, and that’s what everyone in the lower classes want, we want that number 20,” said senior Kylen Cooper.

“For me personally it means a lot because all of my family went here. My uncle actually has a state championship in football. I mean 20, it drives us a lot,” said senior Jackson Mcfarlane.

“Making sure that those details are taken care of, just like they were in those 19 state championships, taking care of everyday and those championships that you are talking about will just take care of themselves,” said Head Coach Chris Berus.

Before Ada can get that illusive number 20 they will take on rival Ardmore in week 1, something Ada football players look forward to from their youth football days.

“When you go to Ada you always go for the Ardmore no more game. That’s the first game where you really see what’s going on,” said Mcfarlane.

The Battle of the Cats will be played at East Central University on September 1st.