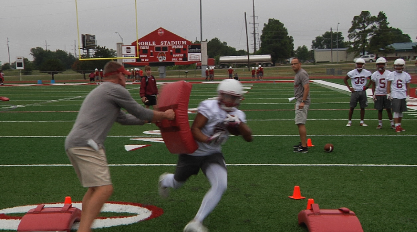 ARDMORE, OK - “I’m ready to get back on the field with my boys and tray and win a state championship. We got close to it last year and we are going to see what we can do this year,” said Ardmore senior, Joseph Clark.

“They know that last year is gone and you’ve got to earn everything from here on out,” said Ardmore head coach, Josh Newby.

Last year would have been a success for many programs, but for the tigers all they remember is the sting of defeat from their loss in the state semifinals and have come into this season determined to do whatever it takes to bring home that state title.

“I mean, really we are all just fired up and ready to go. I can’t wait,” said senior fullback, Chantz Scurry.

Although Ardmore is focused on being fired up for every opponent. There is one game on the calendar that the tigers need no extra motivation for and that just happens to be their first game of the season.

“Opening up the season with Ada, it’s a big time tradition. They’ve got an amazing tradition, a heck of a coach, a bunch of good players and it definitely has our kid’s attention,” said Coach Newby.

“It’s just more motivation. When we are in there lifting the weights coach is yelling, ‘Ada, Ada, Ada’. We’re ready,” said Clark.