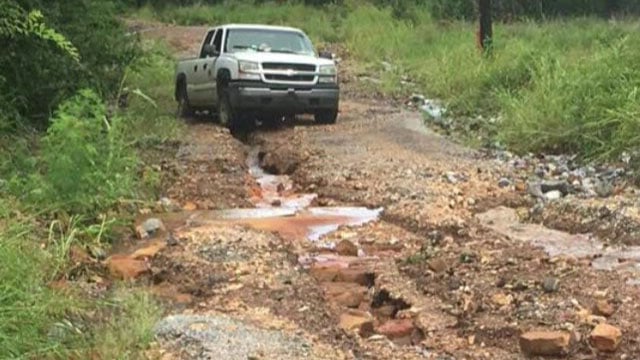 STRINGTOWN, Okla. -- Some people who call Stringtown home tell KTEN they have been been parking down the road and walking to their homes for months because of a deteriorating road.

Along Bradford Drive, the only thing you hear these days are the birds. Vehicles are having trouble driving down the deeply-rutted road, with some getting stuck, damaged and stranded.

In desperation, Angie Parkhillralls sent us photos of the street. She said she hasn't been able to get her car out of her driveway for two months due to the road conditions.

She said she's called the city, and state lawmakers to no avail. But Parkhillralls isn't the only one concerned. 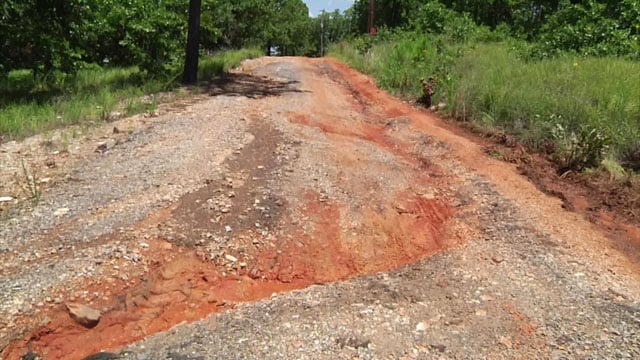 Skyler Manion said his wife has been calling the city for months, saying the only response they get is: "There is no money."

Town Clerk Susie Moore wouldn't go on camera, but confirmed that they not only have no money for road repairs, but they also lack the necessary equipment.

After all the rain this past week, the condition of the roads got even worse. Moore said the town has been getting calls since Tuesday about fixing different streets.

Moore said Stringtown is doing everything it can with the equipment that they do have. Workers were busy making repairs to Fred's Fish Camp Road on Friday.

As for Bradford Drive, the city clerk said they put gravel on that road Friday morning, and hope to fix other streets next week.