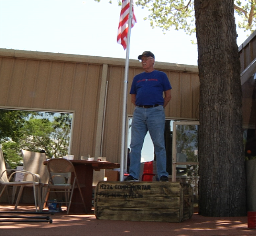 POTTSBORO, TX— A local fundraiser in Dallas to help the family members of fallen soldiers has made its way to Texoma.

Standing in the boot prints of a fallen brother of war, Zip Tarver knows the blood and sacrifice of a soldier.

"You see their name, you see their rank and you realize they're not here anymore. They're gone,” Tarver said.

A veteran of the Korean War, Tarver and dozens of members of the VFW Post 7873 in Pottsboro stood non-stop for 24 hours from Friday to Saturday to support the “Stand to Honor” initiative in Dallas created by Milestone Electric.

"It makes you think about how lucky you are that you came back, but they didn't,” said Tarver.

Hundreds of people have been standing on the footprints of fallen service members in Victory Plaza since May 6th to raise $1 million to provide educational scholarships for the children and spouses of those fallen.

In the last 24 hours, 200 volunteers in Pottsboro have stood in 13 minute increments, representing the 13 folds of the American flag.

"I can't believe the response has been like this. I wish somebody would've done that for me when I came back from the war,” Tarver said.

And volunteers won’t stop standing in Dallas until their goal is reached. So far, Milestone Electric has raised $750,000 of their $1 million goal.