"I will hear from the townspeople"; Tension mounts between Achil - KTEN.com - Texoma news, weather and sports

"I will hear from the townspeople"; Tension mounts between Achille Mayor and council members 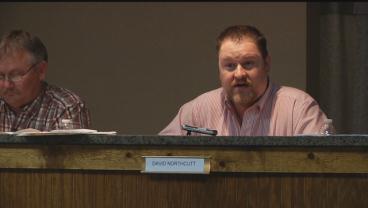 ACHILLE, OK -- Things got heated Tuesday night at an Achille City Council meeting when Mayor David Northcutt was asked to step down from his position but he refused.

This steams from an incident at home about a week ago. Bryan County Deputies were called to his home after he allegedly shot at his partner during a domestic argument.

Northcutt says he did fire the gun but it was not aimed at his partner. Tuesday members of the council held a meeting to ask Northcutt to step down.

But he says he was defending himself against his partner.

He says he was physically abused by his partner in October.

“I fired the weapon not at my former partner but downward and away from him just to let him know I meant exactly what my promise was in October I would never be hit again," said Northcutt.

Northcutt says he will continue to hold his position as the mayor until the election next month unless people in the town ask him to resign.