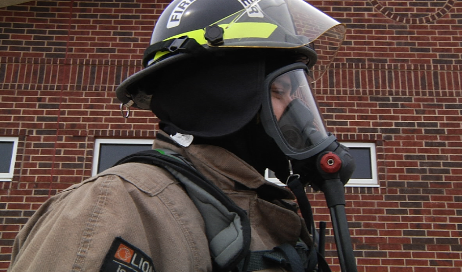 DENISON, TX-- Fighting fires can be a dangerous job, but thanks to new technology it’s become a bit easier for some firefighters in Denison.

It’s a race to beat the clock when you’re a firefighter battling a blaze, because there’s a limited amount of time before the air in your breathing pack runs out.

Something Denison firefighter Billy Mullens has faced every day for the past decade.

"Basically each man was in charge of checking his own air and how much he had left,” said Mullens.

But now the Denison Fire Department is making it easier for firefighters to breathe under pressure. They’ve purchased 39 new self-contained breathing apparatus to increase safety.

"It gives us a lot better idea of how much air is left in our tanks so we can work better and get to a safer place before it gets too low,” Mullens said.

"It gives them the air to breathe so they’re not breathing the hot air and smoky air,” Eeds said.   “The commanding officer would be able to tell if they were about to run out of air and they would have warnings to warn them to get out of a structure before they lose their air,” Eeds said.

Eeds says the new equipment cost more than $300,000, a big purchase made possibly by the city.

But he says saving a life is priceless when every second counts.