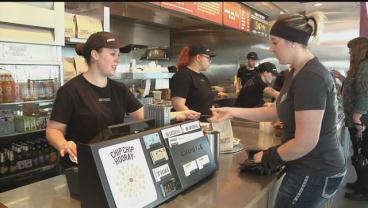 SHERMAN, TX-- Chipotle restaurants across Texas including here in Texoma are fighting cancer one burrito at a time.

Chipotle restaurants across the state of Texas were serving up burritos Thursday to raise awareness for cancer. The fundraiser benefits the Leukemia and Lymphoma Society.

Now you can pay extra for guacamole and that extra money will go towards an amazing cause.

Chipotle has partnered with the organization for the past three years. According to the North Texas Chapter of the Leukemia and Lymphoma Society, the partnership has raised over 16-thousand dollars since 2014.

"My mom is actually battling leukemia right now, so I think it's a wonderful thing that they're trying to help support survivors and people that are going through the illness," Elizabeth Taylor said.

Loyal Chipotle customers were happy to help out a good cause.

"I think it's awesome because everyone goes to Chipotle. I come from Austin College, and we all come here every single day basically. So I think that's amazing," Jiwon Lee said.

"I think it's very generous for Chipotle to do such a thing," Romans said.

"My father passed away from cancer whenever I was five, so I've found that there are many new treatments that are out. And we've had a lot of support from community members and family, so it really means a lot to know that the community is trying to give back," Taylor said.

Chiptole released a statement to us that said they are honored to partner with an extremely important organization.