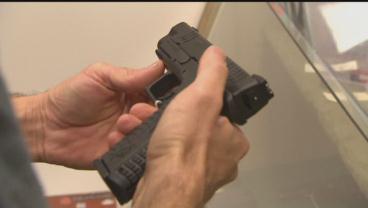 GRAYSON COUNTY, TX-  Beginning January 1st, it will be legal in Texas to carry a handgun in plain sight for those who are licensed and have the gun properly holstered.

"It's going to bring more awareness to the public, for people that are curious about concealed carry or having a hand gun and I think people are going to feel safer," said Paul Maniscalco.

Paul Maniscalco has had his concealed carry license for two years. That license will act as his open carry permit..but once he heard about the law he had some questions.

"I was confused at first.  I wasn't sure if I had to get another license or other safety courses," said Maniscalco.

Open carry is not allowed on school grounds or at the municipal court. If you are not licensed to carry you could be arrested.

Maniscalco says people interested in being able to open carry should do one thing after getting licensed.

"Practice, practice and be aware of your surroundings and the more people do it, he more comfortable everyone will be," said Maniscalco.

Things to be aware of if you open carry, police can stop a person they see a gun and request to see your license.

"A lot of departments are proactive because a lot of it is still a lot of the laws kind of gray and they are working out the details," said Jason Webb.

License holders say this new law will take time and kinks will have to be worked out and understands everyone is just doing their job.

"I think it's a good thing, and anyone with a concealed permit will not have a problem with it," said Maniscalco.

Red River Firearms says in mid January they will have a sign up posted for those to come in and hear an attorney discuss details of this new open carry law more in depth.