Police Trying to Identify Persons of Interest in ATM Robbery 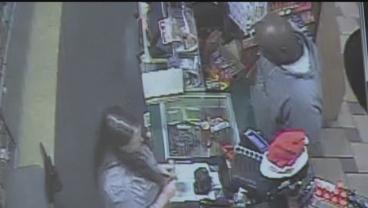 VAN ALSTYNE, TX -- Local officers are working with Dallas PD to find 2 people they say stole an ATM in Texoma over the weekend..

Police say the ATM was stolen from the Independent Bank on Van Alstyne Parkway around midnight on Saturday.

Surveillance video from a nearby gas station shows the 2 men waving down a Uhaul before they go inside.

Police say the men used the stolen Uhaul and a forklift to take the ATM.

The Uhaul, forklift and ATM were found in east Dallas yesterday.

Officers say they're working with a specialized theft unit out of Dallas to find more evidence.

"As well as giving our information to them, they have units out there that work ATM thefts, so we're talking to them, and hope to work them to identify these people," Sergeant Chuck Milner said.

Police in Van Alstyne say the robbers may have gotten away with 11-thousand dollars.

If you have any information on who these two men might be, you're urged to call the Van Alstyne Police Department.