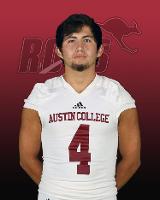 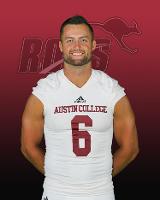 SHERMAN, Texas (AC) – Austin College football players Cooper Woodyard and Javi Reynoso have been named the Southern Collegiate Athletic Conference Offensive and Special Teams Players of the Week, respectively, for the opening week of the season.

Woodyard, a junior quarterback from The Woodlands, had a stellar debut after transitioning from wide receiver, where he spent his first two seasons in the program. Woodyard completed 15-of-30 passes for 311 yards, the most by an Austin College quarterback in two years, and added two passing touchdowns. He also rushed for 86 yards and two more scores, including a 45-yard touchdown scramble just before halftime in a 55-41 win over Hendrix.

Reynoso, a junior placekicker from Springtown, hit 7-of-7 point after attempts and drilled a pair of 43-yard field goals to ice the team’s victory over Hendrix on Saturday. Reynoso was perfect on his two fourth quarter field goal attempts, knocking the second one through with plenty of distance despite a Hendrix defender getting a hand on the football.