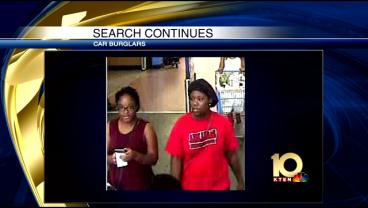 NORTH TX, SOUTHERN OK -- Denison officers have joined in the search for two women police say have been caught on camera all over Texoma using stolen credit cards they got from breaking into cars.

Police say the pair has broken into cars in Colbert, Durant, Atoka and now they're using stolen credit cards in Denison.

Officers say they broke into a car parked in a nursing home parking lot on July 23rd, stole a purse inside, then used the cards to make more than $3,000 worth of purchases.

The next day police say they were caught on Walmart surveillance cameras buying large TV’s in Little Rock, Arkansas.

Police say they are driving what appears to be a white Dodge Charger and one of them has a tattoo on her right arm.

If you have any information about these crimes you are asked to call your local police department.