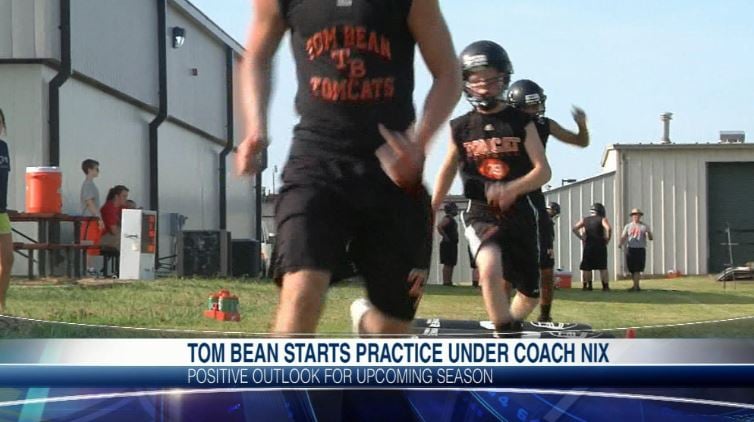 TOM BEAN, TX - After a three and seven season, the Tom Bean Tomcats are hoping to turn things around. They are entrusting new head coach, Pepper Nix, to lead the change.

"Coach Nix is a good coach, I like him a lot. He's probably one of the best we've had. He pushes us hard, I think this will be a pretty good season, “ said Lucas Bornstein, Tom Bean lineman.

“I've been playing since I was in first grade, so it is interesting. But Coach Nix is here now. So, I think we have a good program going. He is a good coach," said Austin Wilson, Tom Bean lineman.

His experience as a defensive coordinator could give the Tomcats the edge in District 5-3A, ranked as the toughest district in North Texas.

"He seems like a more serious coach. He really wants to get things done. He's got insight, he's got a vision of what he wants the program to turn into. We've got a different set up now, where the linebackers are more in charge than they were last year. So, they kind of have to lead the defense better than they did the last couple years," said David Dickison, Tom Bean lineman.

“I think we've got a brand new defense and I think that will work with what we have," said Bornstein.

His players believe in his scheme and have high hopes for the future.

"We're are going to be tough, he works us. He is a good coach. I know our offense will be pretty stout this year,” said Daniel Jackson, Tom Bean running back.

"We've got a better coaching staff this year, and are serious. We are going to try harder, make better plays, do better,” said Dickison.

"We know what he is doing and I think it's going to be really good. He teaches us a lot and we've learned a lot so far. So, I think it will be good," said Wilson.