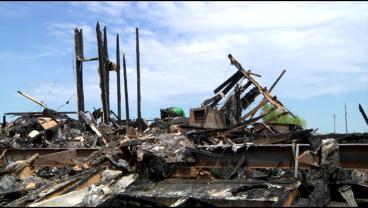 GRAYSON COUNTY, TX -- A Whitewright woman is without a home, after losing it to a fire last week.

But she says material goods aren't the only things she's lost, looters took her late husband's ashes as well.

"I’m soon to be 57 years old and I have to start my life completely from the bottom," said Katie McGough, who lost her home to a fire.

McGough walks through the charred rubble's of what remains of her house, still dazed that her mobile home went up in flames Thursday night.

"I drove up to see cars parked all the way down the highway and fire trucks in the yard," said McGough.

She had just finished a long day of work, when she drove up to several firefighters battling the flames, engulfing her lifelong memories in a matter of minutes.

"I mean I lost everything I own, every memory, every piece of my life is in that house," said McGough.

Officials say the fire started on McGough's front porch, when her cousin and her cousin's grandson were still inside. They were able to get out in time, but McGough's pets weren't as lucky.

She lost three of her cats and her late husband’s parrot.

"My neighbor came over and found Casey in my room, and he found Angela on top of the bed in her room, but I haven't found any trace of the other two," said McGough.

However, her animals weren't all that were taken from her.

She said looters took her toilet, bathtub, and her late husband’s ashes. He passed away from a heart attack five years ago.

His ashes were in a box on top of her bathtub's window sill.

"I’m sure they don't even know they have his ashes, I’d appreciate it if they'd give him back," said McGough.

This isn't the first time McGough's lost a home to a fire; her first house went up in flames about ten years ago.

"I salvaged a lot of stuff back out of that house," she said.

However, this time the fire wasn't as giving, all she could salvage was herself.

"My past has now ended here, and my future started on Friday."

The exact cause of the fire is still unknown, but authorities are ruling it as an accident.

If you would like to help McGough in her recovery efforts, click the link to her Go Fund Me page below.