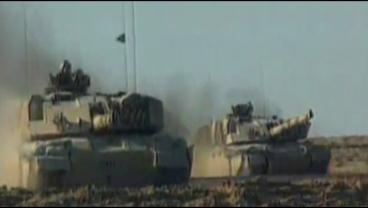 DENISON, TX -- The anniversary of Operation Desert Storm is this Sunday and although the battle might be over, the fight for remembrance is long from over.

Bombs,soldiers and deaths.  These are just a few things that some Americans might remember watching on their television screens during desert storm. But for some Texoma locals they remember watching from the front lines.

"It was a very enlightening time in my life and in retrospect its something that I don't wish on anybody else but I served my country and did my job and when they asked me to go I went," said Veteran Rick Martin.

The first and the shortest of the gulf wars Desert storm soldiers set out to liberate Kuwait but for Veterans like Texoma's Tammy Hamrick the war might have been the shortest, but the impact will last a lifetime.

And that's why Desert Storm Veterans around the U.S are coming together to fight for a memorial right next to all the other great war memorials.

"Our whole purpose is to get a memorial built in Washington D.C along with all the other memorials. So people 50-60 years from now don't forget that we had a conflict and we were part of it," said Martin.

"People need to go there and see that this was important. That it wasn't just a blip in time.  That it was an actual event and it did mean something," Hamrick said.

President Obama has already signed the bill into law giving desert storm veterans hope that it'll be built by 2020, but the only thing keeping them away from the ribbon cutting is funding for the memorial.

"We are looking to raise 25 million dollars of privately donated funds no tax payer money involved and this is just funds here in the U.S the coalition nations are on board with this and if we can raise that much money on our own for them to kick in money afterward will do nothing but help us in the purpose of getting this memorial going and built."

So for now pictures, artifacts and vivid memories are all that Desert Storm Veterans are left with,  but they say hope fills their hearts that someday everyone can see just how big of an impact Desert Storm actually had.