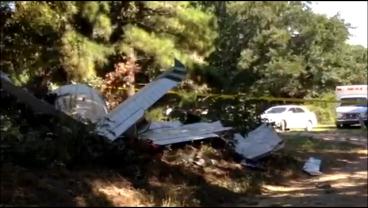 COLBERT, OK --   A woman badly hurt in a plane crash in Colbert Sunday afternoon is getting better.

They say the plane was carrying 64 year old Charles Fehr who died at the scene and his 64 year old wife Vicki Fehr.

Vicki was taken to the Medical Center of Plano in critical condition, but as of 7 p.m. Monday her status has been upgraded to fair.

The FAA says the couple was traveling from Missouri to Fort Worth when the plane crashed in a wooded area in Colbert.

The pilot reported losing engine power before the crash.  The NTSB is still investigating.

COLBERT, OK --  The names have been released of the victims of a small plane crash that happened Sunday in Colbert.

Authorities say 64-year old Charles Fehr was killed in the crash and wife, 64-year old Vicki Fehr was left in critical condition.
Both are from the Fort Worth area.

Jose Olguin was at work when he received a frantic call from his wife.

"You know my wife she was scared and crying, and I said hey everything going to be okay," said Olguin.

Scared and shaken, she told him about the plane crash she had just witnessed right in front of their yard located off of Winnett Rd in Colbert around 3 pm.

"When I come here, I was scared too, because I have never seen this," said Oguin.

Olguin couldn't help but get the chills himself after seeing the small plane shattered into pieces, with two passengers still inside.

First responders said a man piloting the plane was dead on arrival, and the woman next to him was airlifted to a hospital in Plano, in critical condition.

"We have the one that was flown identified, but next of kin hasn't been identified, so we're not releasing any of that information at this time,” said OHP Trooper, Steve Nabors.

Gaylon Montgomery was bailing hail when his son contacted him saying he had just called 911.

"I thought he was kidding me when he said a plane crashed because I didn't see no smoke or nothing," said Montgomery.

Scattered personal belongings like a red suitcase and brown leather briefcase show, wherever the two victims were headed to or from might have been for some period of time.

Why the plane crashed is still unknown, but Montgomery said he might have an idea.

"I talked to one neighbor who said he saw the plane go over, and he said the motor cut out and died,” said Montgomery.

Another neighbor told him they witnessed the plane glide downwards, clipping several pine trees before crashing.

"He said it was quiet as it was cutting through the air, kind of like a glider or something," said Montgomery.

Although the pilot tragically lost his life, Montgomery believes this accident could have been much worse, had the pilot not landed in an empty yard.

The Federal Aviation Administration and National Transportation and Safety Board will send its investigators to determine the official cause of the crash.