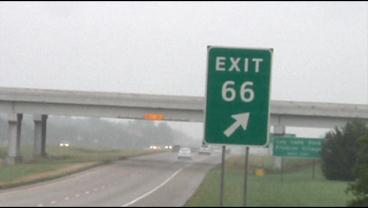 DENISON, TX -- A dark and rainy morning turned even darker after a hit and run on Highway 75.

At 3 this morning Denison police responded to a call of a person lying in the roadway.

That person was Heather Fay Hall, a 38-year old from Tom Bean, TX.

Police say Hall had been at Texoma Medical Center for treatment and left. She then called her roommate to let them know she was walking back to her Tom Bean home.

On that walk she was struck by an unknown vehicle on the Spur 503 exit ramp on Highway 75 where she was pronounced dead at the scene.

Evidence at the scene indicates the suspect in this event is driving a ford vehicle but there are currently no other leads in the case.

Anyone with information regarding the incident is urged to contact Denison police.