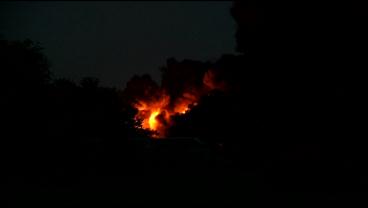 It happened just before 7 p.m., Thursday.

Smoke and flames engulfed the tanks off Highway 377 on Scarborough Rd.

The area that caught fire was an injection well site, where they bring saltwater.

Grayson County Fire Marshall, Kevin Walton said the fiber glass tanks inside the holding facility ruptured when they were hit by lightening, starting the fire.

The tanks are owned by Silver Creek Oil and Gas.

The fire didn't spread past the containment area, because they were situated in an open field.

Marshall Walton said the damage could have been much worse, the tanks were actually emptied out earlier that day.

However, not much remains of the facility.

"All the tanks are gone, all that's left is the containment area around it," said Walton.

Fire officials said several departments were called in to assist.

Firefighters dealt with several severe weather elements while fighting the fire, including heavy rain and lightning.

There were no reports of any injuries.