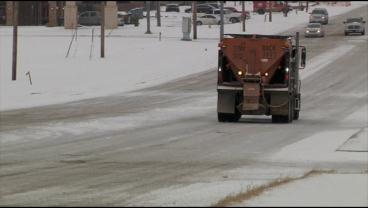 some Oklahoma residents aren't worried about the ice at all.

Others, like Cathy Hodge, don't have a choice but to get out on the roads.

"I'm a contractor for the United States Postal Service so I have to be out driving every day whether it's icy or not," Hodge said.

Although Oklahoma won't reach temperatures and ice over like up north, Ardmore is taking precautions.

The Oklahoma Department of Transportation here in Ardmore, said they will have their sanders ready.

They will also be using "brime" which is a saltwater solution to keep the roads from freezing.

Oklahomans who are used to the cold are equipped for the changes in weather.

"I just take my time getting places," Bessell said. "I have a four wheel drive vehicle, so I use that."

Residents like Hodge and Bessell will be missing the sunshine.