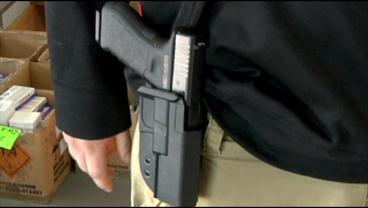 GRAYSON COUNTY -- During Governor Greg Abbott's first State of the State address, he endorsed open carry, making Texas one step closer to allowing those with a license to conceal to make their gun seen in public.

Texas allows long guns and rifles in public as long as they aren't displayed in a threatening manner, but it is one of only six states that prohibits open carry.

"I will expand liberty in Texas by signing a law that makes Texas the 45th state to allow open carry," Governor Abbott said.

Words that have some residents concerned

"I think it's actually quite scary," said resident Michelle Apodaco. "I know the Texas roots. I am born and bred Texas. However, I am not in favor at all of open carry."

Other opponents to Senate Bill 17 include law enforcement officials, who told a senate committee last week open carry could make it difficult to identify an active shooter in large situations.

the bill passed the committee 7-2, and will be considered during general session.

"A lot of people want to open carry because they want to make sure that someone that might do something will come up to them," Jason Webb said.

If the bill passes, those who receive a conceal and carry permit will have the option to carry openly.

Other than that, Webb thinks not much will change, but wants to remind people it's the ability to carry publicly does not make an expert marksman.

"Just because you have a license doesn't mean through osmosis that you actually can handle a gun like a formally trained person," he said.

If open carry passes, some Texomans say they will use it.

"It's more of self defense," Keith Lewis said. "You never know who's out there now."

Some private business also oppose the law, but Webb said as long as they display a government-approved sign prohibiting guns, anyone who ignores it can be arrested for trespassing.