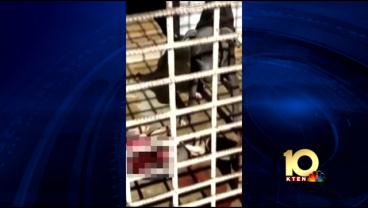 IDABEL, OKLA -- The Idabel Pound and its animal control officer have served the town for more than twenty years. Officials say there has never been a problem before, but a video showing a dog eating another dog at the pound is raising concerns, and the man who took the video says he will never forget what he witnessed.

"I was looking over there because I saw something red on the floor and when I had walked over there she was eating the dog," said Abe Thomsas, the man who shot the video.

The pound is overseen by the police department, which launched an investigation when the video surfaced. They say a nasty video has spread nasty rumors the carcass was fed to the dog.

"We have a dog food bill that we pay," said Tina Foshee-Thomas, Mayor of Idabel.  "That's absolutely ridiculous for somebody to believe something such as that."

Cecil Richards is the animal control officer. He said he left about 10 a.m. and everything was fine. The dogs were even playing, but he returned to find an upset man who shot the video about 1 p.m.

"I'm not for sure, but i want to say the dog was sick, because there was no puncture on the dog around its neck," Richards said.

Though her bones are showing, Cecil says she was only there four days, and did not have time to gain weight, and all dogs are fed once a day.

Oklahoma Department of Agriculture Veterinarian Rod Hall says there are no specific laws on disposing of a corpse but this is a first in his career.

"I have never heard of another dog eating a dog's carcass unless it was very very hungry," he said.

Just a day after the graphic video surfaced, the dog that was consuming another, is now sprawled out on the couch of her temporary home, fostered by Thomas.

Thomas says he took her to ensure she wouldn't be blamed for an attack she didn't commit.

"Being that she's Pit Bull and the situation she was put in, it wasn't her fault that she was eating that dog. They're going to blame her instead of the one who should be blamed."

He is working with various rescue groups to find the dog he is now calling Joy, a new and permanent home.