Denison preparing for must win against Wylie East 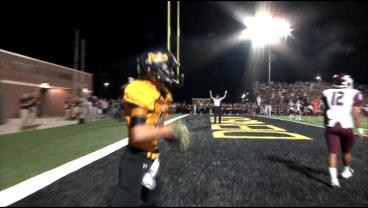 DENISON, TX -- The Denison Yellow Jackets have had a rough time of it as they've been in every single game they've played this year.

They're just a couple bounces away from being in the district 10-5A driver's seat, but instead are tied in last at 1-4.

They'll have to beat Wylie East this week as step one in their fight for that fourth and final playoff spot.

Head coach Chad Rogers says they're learning a lot from their trials so far this season.

"Just got to keep pushing through, just got to keep going back to work and things aren't always going to be the way that you want them to be in life and that's what they're learning, they've learned more life lessons, and I've learned them. It's been hard. It's been hard to watch them go through it because you want them to be successful, they deserve to be successful," Rogers added.

Senior night at Munson Stadium will kick at 7:30 p.m. Friday.