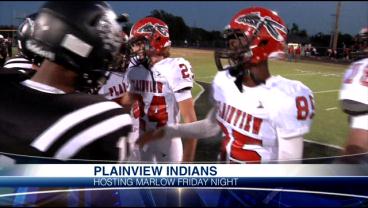 ARDMORE, OK -- The Plainview Indians will stay put in Ardmore as they're set to host Marlow.

It would be a statement win for them if they could hand the Outlaws their first district 3A-4 loss Friday night.

The Indians have never played Marlow in the Chris Berus era, but judging by the film he's seen on them, he knows it will be a tough challenge.

"When you talk about Marlow football you talk about tough kids that play hard, that play physical and that's exactly what this team does. You know, they've kind of ridden a roller-coaster early, you know, played Bethany really, really tough early in the season lost one to Washington early but has played some good folks and beaten some good folks and so it's going to be a fun game Friday night," Berus said.

Kick-off from Plainview Stadium at 7:30 p.m.