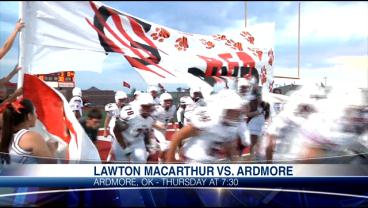 ARDMORE, OK --- On Thursday night the Ardmore Tigers will try to do something they haven't done since 2005...beat Lawton MacArthur.

This could be the year the Tigers stack up pretty well against that elite team.

"They're going to come downhill...they're going to hit us. We just gotta keep striving, get yards, try to put points on the board and hopefully our defense will come out and be strong," Ardmore junior running back O.J. Walker said.

"Their offensive line blocks pretty well but I think that...I feel like they don't match up very well versus us. I don't think they're going to be able to stop us," Ardmore senior center/defensive tackle Michael Nichols said.

No one has been able to stop the Tigers so far this season. They're a perfect 6-0, which doesn't come as a surprise to the number three team in Class 5A.

"We've done the things that we need to do to win ball games. We've protected the ball, we've minimized penalties, we've been ready to play at kick-off. If we do those things, we have enough talent, the kids enjoy practicing enough and they prepare well. So...I'm not surprised," Wendel said.

Lawton MacArthur is also 6-0, which is something many, including the Tigers, expected of their district foe.

"They're a real good football team, they're real well coached and I think they're one of the elite 5A teams in the state. I think they're ranked two, three, one...it doesn't matter, I think they'll be there right at the end of the year too," Wendel said.

Kick-off from Noble Stadium is set for Thursday night at 7:30.