Cowboys fans react to the addition of Michael Sam to team 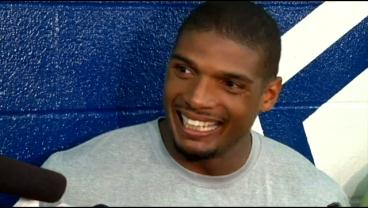 GRAYSON COUNTY -- Michael Sam is getting a second chance in the NFL.

After being dropped by the team that drafted him, the Dallas Cowboys announced Wednesday the team has added him to their practice roster.

The idea isn't sitting well with some fans.

Earlier this year, Sam became the first openly gay player in the NFL. But for the past four days, he's been out of a job after being cut by the St. Louis rams.

The move created mixed reaction on our KTEN Soundoff line:

"I think Jerry Jones is crazy has hell for letting him come play down there," a caller from Atoka said.

"If the Dallas Cowboys allow Mr. Sam to come and play, I've been a lifelong fan, watched every game and I will never watch one again," another caller from Ada said.

Dr. Lisa Brown teaches psychology at Austin College. In addition to moral beliefs about homosexuality, she says fans may also not be able to get past the stereotypes they see in a player like Sam.

"It's a collision of two very different stereotypes," she said. "There's a stereotype of gay men where the stereotype is they're very effeminate, very weak, flamboyant. But on the other hand, there's the stereotype of football players of being hyper-masculine, very strong, very aggressive, and so when those two things come together often people will, it's like cognitive dissonance, they can't reconcile the two."

But most Cowboys fans sounding off welcome the addition.

"I wouldn't care if the Cowboys hired 'Francis the Talking Mule' if it turned them into a winning team," a caller from Southmayd said.

"People shouldn't be judged simply on what their preferences are they should be judged on their skills," Cowboys fan Trenton Broadway said.

Dr. Brown agrees but at the same time says Sam shouldn't be given special treatment simply because of who he is and headlines he'll grab no matter which jersey he wears.

The Cowboys added Sam four days after he was released by the St. Louis Rams when teams had to cut their rosters down to 53.

He is not likely to be on the active roster for Sunday's season opener against San Francisco.