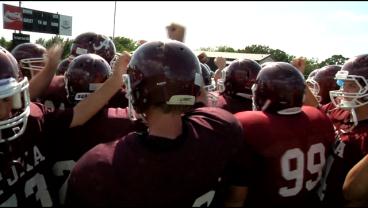 "All we can do is go up. We can't go any further down. Our main goal, in our non-district games, is we want to be competitive. And try to put our kids in the position to not only compete but to possibly win games so as we do get into teams like Davis, Kingston and Marietta, Hugo and Tish, at least we have a reservoir as to hey we can compete with these people," Atoka head coach Lloyd Smith said.

Atoka's new head coach, Lloyd Smith comes from Northwest Classen, a 5A high school in the Oklahoma City area. And he knows what it takes to rebuild a team.

"I realize that it's something that you're not going to turn around overnight but you can take strides forward. So that the community sees that 'hey our kids are getting better, they're getting more solid and more sound in what they're doing," Smith said.

After not winning a game last season, not a lot of people think Atoka will do much this year. But with a new coach and a new attitude, the Wampus Cats think they can prove skeptics wrong.

"We went 0-10, everybody is going to come in, thinking they're just going to beat up on us. But we just gotta show them that we can fight and just play with them. We have a lot of great guys out here, our line is looking a lot better from last year. So we just gotta come in, work hard and fight," Atoka senior quarterback Jalen Harris said.