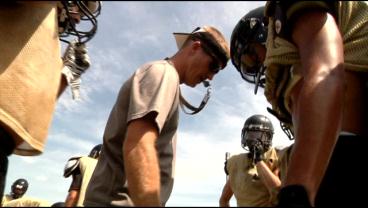 MARIETTA, OK --- The Marietta Indians haven't had a winning season in 14 years, but they have made it to the first round of the playoffs the past two seasons. And they think they'll continue that playoff streak and finish with a winning record in 2014.

The Indians are in a tough district; a district that features the reigning Class 2A state champion Davis Wolves. But the thought of taking on the champs doesn't scare Marietta.

"Jody Weber does such a great job, it's such a tradition rich town. But now I think it's time for Marietta to go toe-to-toe for four quarters with those guys, " Marietta head coach Matt Suffal said.

"They always bring a great bunch of kids it's always fun playing them every year and then to watch them go on and win is a neat deal but I think it's our year this year. I think we can step up and go four quarters with them," Hallum added.

Besides beating Davis, the Indians other main goal is to bring a home playoff game to Marietta.

"I think it would mean a lot to the town, we always have great support from the town. Stands are always full at our games and that means a lot to us and I think that would just shoot it over the top," Hallum said.

The Indians kick off the season on September 5 against Lone Grove.