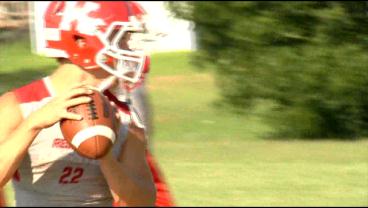 KINGSTON, OK -- It's year four under head coach John Caraway and it could be his best team yet.

"We got our nucleus back and these young men had a lot of playing time last year and we have high expectations for our young men and hopefully we can get better each week and make that run in the playoffs that we want to," he said.

Last year they'd accomplish their biggest goal - hosting a playoff game, something that had not been done in 25 years. With eight returners on each side of the ball, they'll hope to start a streak.

"It motivates us a lot. We're going to have hopefully one or two home playoff games. I really hope we're going to go far," senior linebacker and running back Hunter Hammon said.

Unfortunately for the Redskins, their district is still as tough as ever. They add Hugo and Atoka while the state champion Davis Wolves are still around. They'll have to take them on in week 10, but none of that bothers the Redskins' confidence.

"We couldn't think any higher of ourselves. We know we have a difficult road to go through but we're going to work hard and get through it," senior tight end and linebacker Mason Whipkey added.

"We feel like we're getting better as a football team here in Kingston, but everybody in our district is getting better and so I expect a very tough match-ups from week to week and hopefully we can come out victorious," Caraway said.

The work is cut out for the veteran squad, but if they've learned anything from their head coach, expect week 11 to be right back at Harold "Bulldog" Henry Field.

"Coach Caraway always has a saying, he says, "finish strong." And that's what I think our senior class motto is. That's what we need to do. We need to just finish strong and go all the way and tell these young kids how to do it," Whipkey concluded.