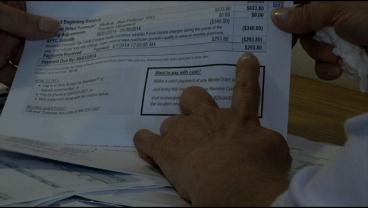 DURANT, OK-- In a You Tube video posted online President Obama explains the expectations of the Affordable Care Act,  " Because no one should go broke in America because they get sick. Insurance companies will be required to cover with no extra charge, routine check ups and preventive care like mammogram's and colonoscopies,  because there's no reason we shouldn't be catching things like breast cancer and colon cancer before they get worse." Says the President.

It was promises like those and a move to Durant to take care of her aging mother, that led Janet Grigg to the healthcare marketplace. Although, what she says she has found, is something the cancer survivor says, is hard to believe. Grigg, who is  a colon cancer survivor says she went online to the marketplace, put in her personal information and picked a Blue Cross Blue Shield plan. Then, went to the doctor for her annual cancer screenings.

"And when I got there, they had said to me, that the card would not be accepted. That they had, in fact received a memo. And I was like ,really, I just saw the doctor two weeks ago." Grigg explains, after her second visit to University Medical Group in Durant.

That visit is also where Grigg says billing employee's told her the previous visit would have to be paid for out of pocket, as well as, any future visits to the facility. But she says that's not the most surprising thing she found.

"That I would not find a doctor within a 400 mile radius from Dallas up to Oklahoma City that would in fact take the plan that I had chosen. (The plan) that I thought would be acceptable in Bryan county, since I did select it as my residence. So therefore, one would be of the mindset that it would certainly be acceptable since it came up on the marketplace website." Grigg tells us.

That same assumption is one she says, a marketplace representative told her, has been made by others.

" So finally she understood and she explained to me that she gets calls like this everyday."

She says it's an issue that's unacceptable and that it's especially troubling for those paying for a plan that they believe could help keep them alive.

" But I understand also, that the key to prevention is early detection." Grigg says, tearing up.

KTEN reached out to representatives with healthcare.gov  and submitted a request for comment, so far they have not responded.

As of now, Grigg says,  after dozens of phone calls, she is finally in the process of changing plans but won't be getting back the almost 300 dollars a month she's paid in since January, or the cost of the doctors visits that weren't covered.

" I guess my plan is, my hope is, that I remain a survivor, that's my prayer." Grigg tells us.

We also contacted Blue Cross Blue Shield of Oklahoma. They issued this statement :
"Because of the dramatic changes occurring within the health care industry, decisions for our existing customers that were once straight forward are not anymore due to many new options available to them. For new customers, some may have never had insurance before and are learning the ins and outs of coverage for the first time. Our members are our first priority and we do everything we can to ensure that they get the information, help and coverage they need so they can make the best decisions for themselves and their families. Because there are so many new options and plan features, it’s important for customers to understand the details of the plans they select. Plans vary in costs and associated networks from year to year. To help our members get the most out of their benefits, we encourage them to review helpful tips and information on our website, as well as use our online tools such as the Provider Finder, before using their benefits. Customers who have specific questions about their benefits or providers in their network can call the customer service number on their member ID card."