Driver Slides Off Highway In Sherman During Rainy Morning 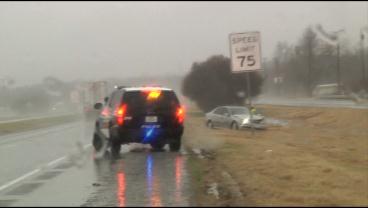 SHERMAN, TX -- There were many slick roads across Texoma, as the rain poured down for much of the day on Saturday.

The weather may have helped cause several fender benders across the area.

One of those happened around 11 a.m. on Highway 75 near Center Street in Sherman. The driver was heading south when the car went off the side of the highway. No one was injured.

Rain was coming down heavy at times for several hours, especially this morning. There were some reports some icing overnight in the far northern counties of the KTEN viewing area, but it later melted.