A Year In Review - KTEN.com - Texoma news, weather and sports

A Year In Review 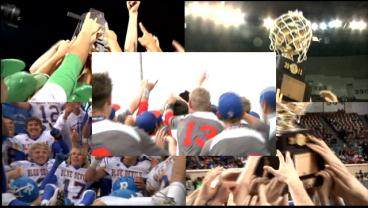 OKLAHOMA--- The 2012-2013 High School sports season has wrapped up. It was a successful year for many local Texoma teams.

In December, the Ringling Blue Devils defeated Wynnewood in the Class A State Title game. The win gave the Blue Devils their first state championship since 2003 and their fourth overall.

"It feels amazing. I don't know how to describe it. It's surreal..it seems like it's a dream," Ringling quarterback, Tanner Richardson said.

In March, the Sulphur Lady Bulldogs capped off a perfect season when they defeated Perkins-Tryon to win the Class 3A State Title. It's the school's first title.

"We practice hard we play hard. We strive to put our emphasis on defense. It feels good to get a W and take a state championship to Latta," Latta guard, Trent Strorts said.

Skip ahead to May, the Silo Rebels faced off against the number one team in 2A baseball, the Dale Pirates. The Rebels won the game 3-2 and brought home the school's sixth spring title.

"We were the underdog and we came back and won it. It felt great jumping on a big pile of rebels," Silo right fielder, Lance House said.

Then after a month-long lay off, the Class A State Tournament got underway. The championship game would feature the Rattan Rams and the Roff Tigers. Rattan would go on to defeat Roff in extra innings to win their second consecutive spring state title.

We also want to congratulate the Tushka Lady Tigers and the Rattan Lady Rams on their state titles as well!