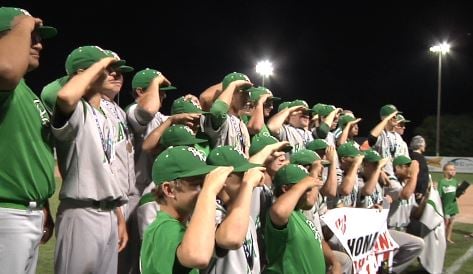 The senior laden squad adds their second state title to the program's other ten.

Their state tournament journey would begin more than a month ago with a 15-5 quarterfinal run rule of Thomas-Fay-Custer. Hours after the contest the tournament would be suspended.

Tuesday Wright City was reinstated and the tournament resumed Thursday. It didn't help senior Brandon Jones, who had to report for military duty just days before.

They would dedicate their run to No. 23, beating Cashion in a convincing 12-1 run rule.

Their inspired play carried over into the final where they would actually trail Roff 3-1 the majority of the game.

The Rams would not waste any time in extras putting two runs across in the top of the eighth and finishing off the Tigers in the bottom half of the inning with the 5-3 final.

Head Coach Ryan Cordell says it was all for Jones.

"Brandon had his phone with him this morning for a little while and he started texting me about six o'clock. I know he's dying just wanting to be here with this teammates and for us to go out there and win it for him -- I'm just tickled to death."

They will resume summer ball and be a favorite to win another title in the fall.