Documentary being made on domestic violence victim - KTEN.com - Texoma news, weather and sports 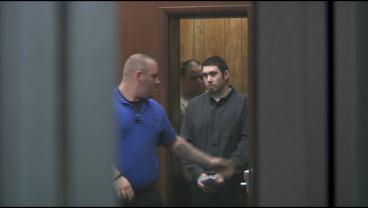 Scott entered a blind plea of "no contest" in October after agreeing to a plea deal with the state.

Late last month, Scott filed a motion to revoke his blind plea claiming he did not receive adequate legal representation.

His attorney has now asked to be removed from the case.

A hearing is set for January 15.

UPDATE [Dec. 11, 2013] -- The man accused of murdering three people last summer will pay with his freedom.

Wednesday afternoon, Judge Coppedge sentenced Joshua Scott to life in prison without the possibility of parole for all three murder counts. The sentences will run consecutively.

In October, Scott agreed to a plea deal with the State of Oklahoma.

He changed his plea from "not guilty" to "no contest."

In exchange, the death penalty during his sentencing was off limits.

During the sentencing hearing, the mother of one of the victims, Ashleigh Lindsey, wept on the stand while reading a victim impact statement.

It was the first time Tara Woodlee had the chance to speak to Scott since her daughter's murder.

Scott was charged with killing Chad Page, his mother's boyfriend on July 12, 2012.

He was also present a day later when his friend, Joshua Mahaffey, shot and killed Mahaffey's girlfriend, Ashleigh Lindsey. Lindsey was pregnant and her unborn child did not survive.

Mahaffey then killed himself, leaving Scott to face charges.

After today's hearing, Woodlee says she was pleased with the outcome.

"It's complicated because it's kind of a sense of relief," Woodlee said. "I got to say everything I wanted to say but at the same time it's not total justice because what is total justice when you lose a child?"

After hearing multiple, emotional victim impact statements from the families of Lindsey and Page, Judge Coppedge sentenced Scott to the maximum sentence allowable.

UPDATE [Oct. 30, 2013] -- Today, Joshua Scott pleaded no contest to three counts of first degree murder, a move family members of the victims say they did not expect.

Joshua Scott said nothing as he was escorted out of the Marshall County courthouse Wednesday.

He had just changed his "not guilty" plea to "no contest," in front of a half-packed courtroom.

Although cameras were not allowed inside, friends and family of Ashleigh Lindsey and Chad Page watched as the man accused of killing them faced a judge.

"He kept smirking and laughing and that was hard to watch," Lindsey's mother Tara Woodlee said.

In July 2012, prosecutors say Scott shot and killed Chad Page, his mother's boyfriend at the time, because he didn't like him, and "thought he was a punk," according to prosecutors.

Later the same day, Scott and a friend, Joshua Mahaffey, went to Heather Lara's home in Enos, Oklahoma, where Ashleigh Lindsey was staying.

"She was staying at my house because we were trying to protect her," Lara said.

Prosecutors say Scott held Lara down while Mahaffey shot and killed Lindsey, his ex-girlfriend with whom he'd had a history of domestic violence against. "He held me would not let me go to dial 9-1-1," Lara said.

Lindsey did not survive. Neither did her unborn child.

In an interview with KTEN earlier this year, Woodlee showed us a photo of a revolver posted to Facebook that she says was used to shoot both Lindsey and Page. Mahaffey also turned the gun on himself, leaving Scott to face three murder charges.

Family members of the victims say they first learned Scott was willing to agree to a plea deal last week in a meeting with prosecutors. They expected him to plead guilty but say they were shocked when they learned in court Wednesday that decision had changed.

"It would have been a sense of, he was actually taking responsibility for the things he had done," Woodlee said.

Under the plea deal, the death penalty has been taken off the table as a possible sentence. A burglary charge has been dropped as well.

Scott's attorney, Eric Jones, says legally, a "no contest" plea is about the same as pleading "guilty," but was an admission he says his client was not willing to make.

"It's very hard to plead guilty to murders," Jones said. "Sometimes it's hard for people who commit burglary to commit to it. It's just hard to do."

Victims' impact statements will be read, and Scott's attorney says Scott will likely take the stand in hopes of receiving a lesser sentence.

UPDATE: Accused killer appealing murder charge of unborn child
UPDATE [July 31, 2013] -- A judge in Oklahoma has upheld a state law classifying the killing of an unborn child as murder.

In July, an attorney for Joshua Scott appealed a decision by a lower court to charge Scott with murder in the death of an unborn child.

An appeals court denied that request, according to court documents filed on July 26.

Scott is charged with killing Ashleigh Lindsey in July 2012. She was pregnant at the time and her child did not survive.

Scott's trial date was originally set for late August but it has been postponed.

UPDATE [July 16, 2013] -- A man charged in connection with the death of an unborn child  in Marshall County is challenging a state law that allows the charges to be filed.

Joshua Scott is accused of helping a friend who police say murdered Ashleigh Lindsay in Kingston last July.
She was pregnant at the time and her unborn child didn't survive.
Scott was charged with the murder of Lindsey and her  baby, but earlier this month Scott's attorney filed an appeal challenging the murder charge for the unborn child.
Scott's trial is set for next month, but it could be delayed if a judge isn't able to make a decision on the appeal in time.

According to court documents, Joshua Scott now faces charges for possession of contraband in jail.

Scott is already facing three different first degree murder charges in connection with the deaths of 20-year-old Ashleigh Lindsey, her unborn child and another man.

Scott is also facing burglary charges. He is being held in the Marshall County jail without bond.

Documentary being made on Texoma domestic violence victim
[Posted: Feb 21, 2013 6:46 PM CST]
MARSHALL COUNTY, OK -- She was an athlete, played guitar and stood out on stage. But Ashleigh Lindsey's life was cut short in July 2012 when police say her ex-boyfriend, Joshua Mahaffey, shot and killed her inside her Kingston home.

"She was actually quite excited and he was calling quite a bit," Woodlee said.

A month after meeting, the two moved in together. By March, Woodlee says she began seeing signs that her daughter was in an abusive relationship.

"She called me locked in a bathroom, crying, saying that Josh had burned her in the face with a cigarette," Woodlee recalled.

Woodlee says it was the first of many incidents, but says, after most fights, her daughter would downplay them.

"She's calling back saying mom there's no problem. It was a misunderstanding."

Eventually, Woodlee says her daughter was convinced to leave Mahaffey. She moved out, filed for a restraining order and sought help at the Crisis Control Center in Durant.

"Ashleigh was doing everything that I could've asked her or recommended for her to do," Anna Marcy said. Marcy was Ashleighs' counselor at the center.

But the day before Ashleigh was set to check into a women's shelter, Woodlee says Mahaffey used the revolver his roommate posted a picture of on Facebook to shoot and kill her before turning the gun on himself.

"I called her on the phone and her roommate said Ashleigih has just been shot, and Joshua has shot himself. That's the worst think you ever want to hear," Woodlee said.

Mahaffey's roommate, Joshua Scott, was allegedly with Mahaffey at the time of the killings.

Scott is being held in the Marshall County jail without bond. His attorney did not respond to our request for comment. A trial date has been set for August 26.

Governor Rick Perry's office has sent the producers of the documentary a letter of commendation for raising awareness about domestic violence.

"This story is real. It wrote itself and I think we can tap into the drama and the passion, the energy from this story and really bring it to life. Also, to give Ashleigh and Patience a legacy," producer Joey Edwards said.

Woodlee says she now wears it almost every day as a constant reminder of her daughter and granddaughter, and legacy she hopes they both leave.

"I just feel like it's my daughter moving through me to help people and not be where she was," Woodlee said.