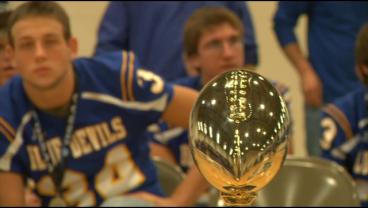 RINGLING, OK --- It's a good day to be a Ringling Blue Devil. The 2012 Oklahoma Class A State Champions received their gold ball trophy today. The students and faculty viewed a slide show of the Blue Devils playoff run and also heard from and Head football coach, Tracy Gandy at today's trophy presentation.

"It's a huge day for our football program. We want to share it with you," Coach Gandy said.

Coach Gandy's squad has been getting compliments from coaches all over the state of Oklahoma. But one coach's kind words stuck out above the rest.

"I thought the Tulsa Union coach summed it up. He said the Blue Devils are a class act. And I just swelled with pride and that's when I knew...We are the state champions!" Coach Gandy said.

The 'class act' state champions presented the title trophy to the school board and they received gold medallions from their coaches. Senior Jackson Dillon and his teammates hard work has finally paid off.

"Every time we went out on the field...as soon as we strapped them up and got on the field we said 'alright we're gonna be mean and were gonna go out there and win some football games. And we aren't going to let our opponent outwork us or out beat us.' We did that every game. Everyone just turned into a different person as we went on the field. We just knew what we had to get done and we just worked our tail off to get it done," Senior Jackson Dillon said.

The Ringling Blue Devils are your Oklahoma Class A State Champions!